The Kickstarter for this ends THIS SUNDAY the 19th of March. Head to www.synthtech.com to check out the module and head to the campaign to bag yourself one. You’ll have very little chance of getting the module again after this Kickstarter has run it’s course.

Back in April 2012 Paul T Schreiber of Synthesis Technology teased a first look at a prototype/concept that was the E370 Quad Morphing VCO. Fast forward to today and the E370 has absolutely smashed it’s Kickstarter campaign currently at $168,462 (it’s gone up another $1000ish while typing) of funding with the initial project only asking for $58,000.

The module took a while to come to life and was originally proposed in this thread – Muff Wiggler link. There was a lot of discussion about features, panel layouts etc but it was held back to focus on cheaper modules. There’s also newer and faster DSP now giving us loads of features – it’s nuts!

The E370 is 4 Morphing VCOs that have all the functionally as the previous Synthesis Technology oscillators notably the E340 Cloud Generator and E350 Morphing Terrarium. So let’s check those out to see what you’re getting and where these concepts came from. 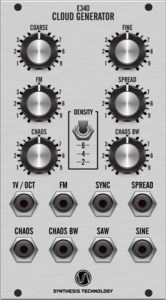 The E340 has a switchable density of 2, 4, or 8 oscillators that can be spread (detuned) to create a ‘cloud’ of sines or saws. Most are familiar with a big swarm of supersaws but a thick cloud of sines is a beautiful thing too! It featured (at the time) controls not seen before which were chaos and chaos bandwidth which animate and ‘wiggle’ the detuning and the bandwidth controls the speed of that. As you can imagine it’s easy to get a thick animated swarm or cloud for basslines, FX or pads. 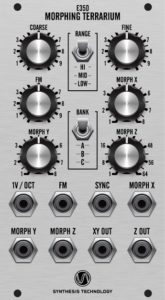 It’s hard to know where to start with the E350 as I still feel a bit dumbstruck in my own little honeymoon period with it (I’ve had it for years now) as it’s the smoothest of the smooth morphing wavetables I’ve ever heard. It’s a dual output wavetable oscillator that has 3 banks of 64 waveforms that smoothly and glitch free morph between each other as the algorithm used calculates 128 “in-between” waveforms. In reality it’s like having over 24,000 individual timbres with all the morphing between them all. So exploration can be pretty endless. The first output has an XY output that offers a chess board like set of rows and columns to morph through. The second output is the Z output which moves through the rows on a single axis allowing you to have two different sounds and independent morphing over the X, Y and Z positions. It’s also (as Paul says HERE) the “worlds best LFO” as a 3 way range switch can take it down to 13 minutes per cycle with all the added waveform morphing and hard sync options. Finally there’s a quadrature mode (accessed by a jumper on the back) that moves the XY and Z outputs to be out of phase with each other (phase is modulated on the Z parameter). Features aside … rest assured it’s ace as an audible VCO or LFO. For added “proof” beyond my ramblings check out this video I did on the E350 and E355 (dual LFO variant of the E350) for Future Music magazine HERE.

With those features from the E340 and E350 in mind, imagine how good it would be to have clouds but with morphing wavetables … the E370 does that! There’s also attenuators for the CV inputs (crucially missing from the original modules that ooze loveliness with attenuated modulation) and thanks to passing many “stretch goals” in the campaign it now has 4 voice chord mode for any or all of the 4 oscillators, linear FM and if the final stretch goal is met it will also have TZFM (thru-zero FM).

Some history and information behind us at this point I should repeat … go grab an E370 on Kickstarter before you loose the chance to get one in the future! Click HERE.

While we’re deep into a long form post let’s explore some other Synthesis Technology modules. There’s the E950 Circuit Bent VCO. It uses licensed technology from the original Texas Instruments LPC speech synthesizers (such as the speak and spell). It contains original ROMs with additional banks of wavetables from the E350 for a “low cost morphing VCO”. The module can be used in both normal and circuit bent modes and all under voltage control that are repeatable and controllable unlike some temperamental and unreliable circuit bent glitch machines some of you may have used.

Coming off the back of the E950 is the E951 expander. This is an add on that expands the functions with an OLED display showing the full list of words and phrases in the speech banks, it also allows for short and long vocal snippets to be looped and played. THIS video from John L Rice shows the functions of the expander nicely. Check it out HERE. Some of you more avid modular users and Synthesis Tech fans may have seen the “Logan’s fault” panel for the expander that Paul had a while back, but since then there’s the killer (small run joke but fun none the less) Magpie panel with Logan from Low-Gain Electronics face on it. This panel combines the E950 and E951 in one panel. 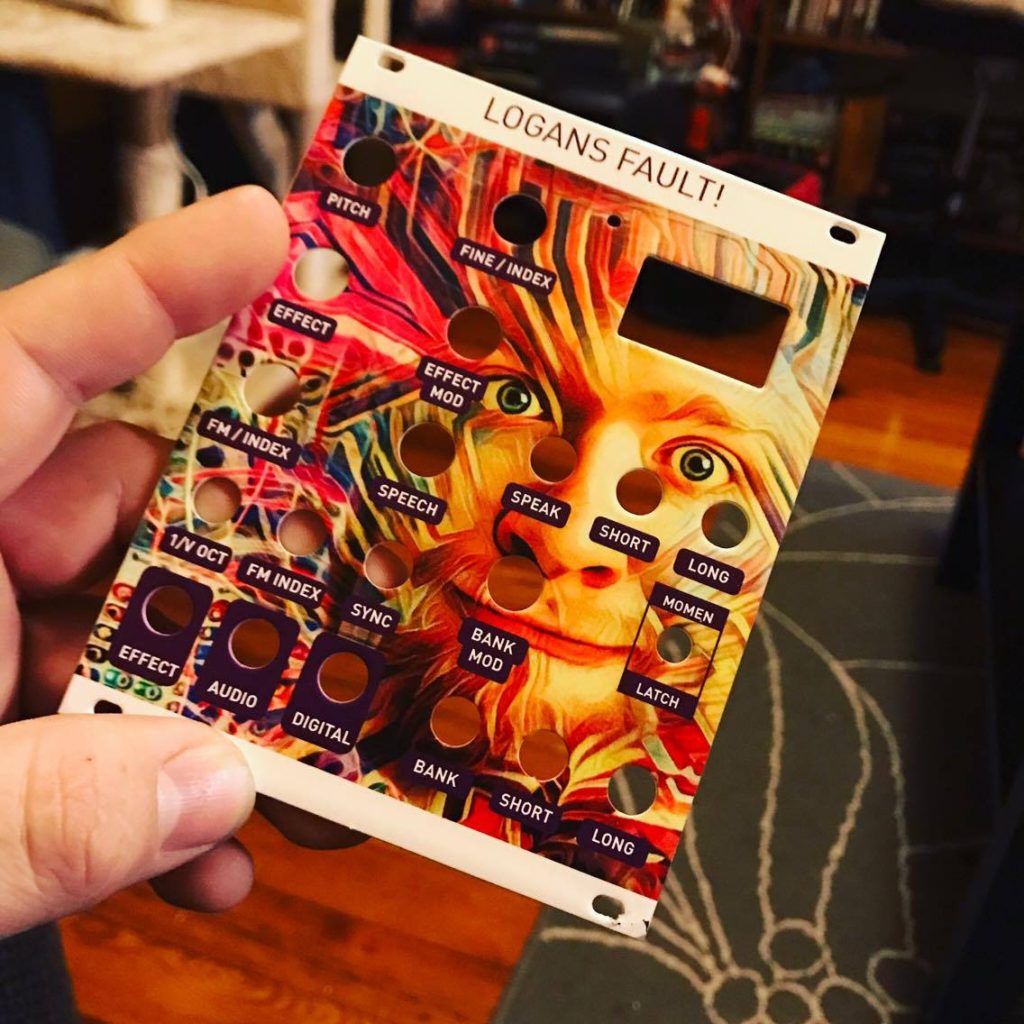 I thought I’d grab a quote from Logan about why the expander is “his fault” so here’s a quote from him directly.

The 951 Expansion came to be when Paul mentioned to me he was working on an official circuit bent speak&spell VCO module. Since I have a long running history with circuit bending, and being the over opinionated asshole that I am, you can imagine I was very adamant about what feature sets were going to be made available. Since I was the “young buck” who had actually circuit bent a speak&spell or two (or 20…40) in his day.  We hashed out ideas. I sent him a video showing the functionality of the short and long looping. The nature of how you could get it so slow, it would turn into a random burst generator.  Which unfortunately didn’t make it to the design since he didn’t want to have a “reset” push button feature because it would actually cause the processor to crash just like the original.  So Paul was kind enough to take my thoughts into consideration and include them in an expansion header on the back of the E950… as for the MagPie Logan’s fault panel, that came to be I think because in the prototype stages of the E951, Paul made panels with “Logans Fault Edition” across the top of the module. He had them at Knobcon to show the module off and a friend who was displaying in the same room some how got the idea to ask MagPie (Kris) to do a panel with my face on it to be funny. Well the joke turned into a legit panel that combined the two modules into one panel with a picture of my face looking rather strange. Kris was kind enough to send me a royalty payment of a free panel so I can officially look like an ego maniac with a picture of myself in my rack. *laughs*

I should note you can check out Low-Gain Electronics modules by clicking HERE. 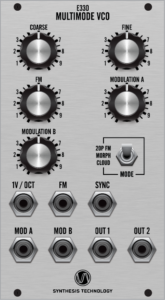 Finally let’s check out the E330 multimode VCO. This (like the E950/E951) is part of Paul’s focus prior to the E370 to make some cheaper modules. This VCO gives you some morphing wavetables, cloud mode and 2 operator FM. So it’s a great way to get a wide range of tones and some Synthesis Technology quality into your system.

If you’ve read this far you deserve a medal, comment with the words “DivKid loves Synth Tech” and I’ll send you some stickers (limited potentially if I have highly underestimated peoples commitment to reading these posts) EDIT – no more free stickers. Gotta get in their quicker than I anticipated. For those wanting some watch out for more chances in the future.