On all accounts it looks like Qu-Bit Electronix have absolutely smashed it for NAMM. 4 new modules covering envelopes, mixing, random and filtering. I’ll be posting updates about NAMM (I’m not there) with my personal spin on what we’re seeing. So strap in for blog posts a plenty! Click images to zoom in. 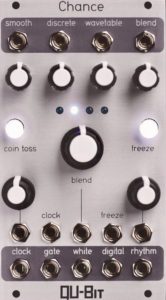 Lets start with Chance the new random module. It has 9 outputs including white and digital noise (no sign of that rate controlled by anything), random gate, random ‘in time’ rhythms, clock out (also takes clock in) and 4 random voltage outputs. Smooth (ramps between values), discrete (stepped), wavetables (random shifts between in time sine, ramp and triangle waves) and the blend out (can shift and random mix the the first 3 cv outs). It’s looking great, and if it’s anything like a big brother to the already awesome nano rand then this will be fantastic! It’s 14hp and also has a freeze knob to control freeze and hold its current state. 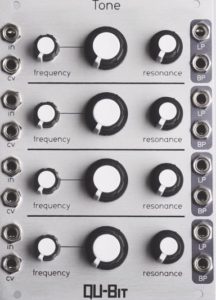 Next up we’ve got Tone … now NOT that holy pilgrimage guitarist trek through hundreds of pedals, stringS, cabling and amps combos to find … it’s a new quad filter! This looks very “Mutable” to me in design, not judging just popped out that way, clean, symmetrical, those knobs etc. Anyway, it’s four 24dB per octave low pass and band pass filters with input for audio (duh liiiiiiike obviously!) and frequency CV with attenuator with knobs for CV depth, cut off and resonance and a LP and BP output per channel. It’s a cascade OTA design providing a “warm, buttery character” that looks like it would be great next to samplers / mixers and drums to me. Multiple filters for left and right stereo imagining or mono sub mixes of drums before hitting a final mixer would be a breeze. It’s 18hp for those shaping up space case to squeeze one in. 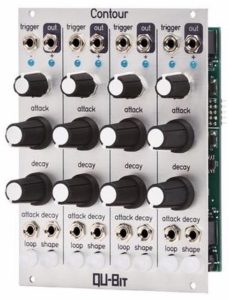 Third up is Contour which is a quad attack / decay generator with a few tricks up its sleeve. There’s a trigger in and cv inputs for both attack and decay. The output has an attenuverter for inversion and scaling of the output which is a nice addition as plenty of modules don’t have CV input controls. The envelopes can loop and change between linear and exponential as well as link channels. The channel linking is the unique part as you hold the loop control for 3 seconds then click the next channel (these flash and you can pick any, in any order) which will trigger the linked channel at the end of cycle from the first. Pretty cool! It comes in at 20hp and is due to ship at the end of this month. Others ship in coming months. 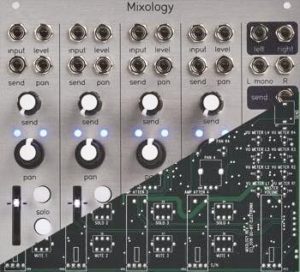 Finally we’ve got Mixology. We saw this last year with the old design Qu-Bit were using with slightly different features, so it’s good to see its new look and features. It’s a four channel “output/performance” style mixer with panning and a single send as well as solo, mute, output meter and CV over level, pan and send. It certainly fleshes out the new look Qu-Bit range well and is slightly larger than before at 28hp, offering a more ergonomic layout.

The Analogue Zone videos (as with other event coverage) are great so far and here’s one with Andrew from Qu-Bit going through the modules.