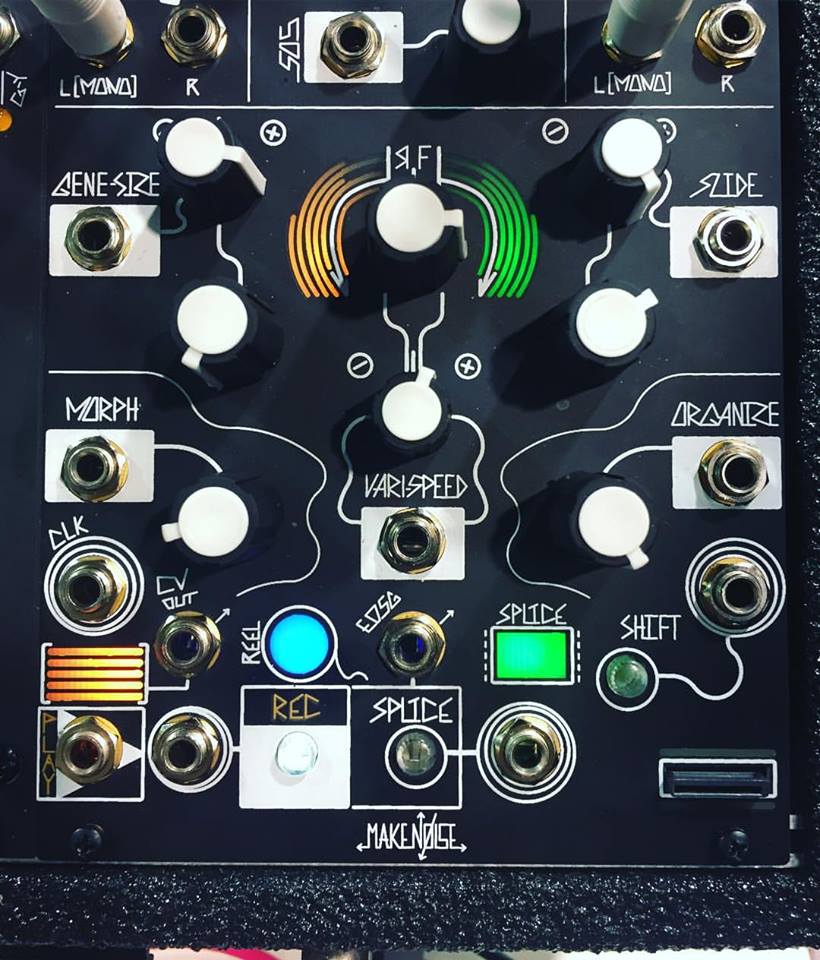 The Morphagene is the latest collaboration module between soundhack / Tom Erbe and Make Noise and is “microsound and tape music module that’s designed to capture, regenerate and process sounds from both inside and outside your modular system”. It’s a stereo in/out module and works on the idea of tape reels. Each audio file is called a reel and multiple reels can store on SD cards. Each reel can be up to 87 seconds long, splices can be up to 87 long and it can have up to 99 slices per reel. Additionally you have genes (like the Phonogene) that can be used for small grains for granular processing.

Tony from Make Noise has been introducing the module with Time Lag Accumulator. Time Lag Accumulator literally means Time Delay Memory. This was first used by an unknown engineer on Terry Riley’s 1963 recordings for Music for Poison in Paris. It’s based on using two tape recorders for delay and feedback. Here’s a great quote about it from an interview with Terry Riley

“The accumulation technique had not been done yet. I was working in Mescaline Mix. I wanted this kind of long, repeated loop and I said, ‘can you create something like that?’ He got it by stringing the tape between two tape recorders and feeding the signal from the second machine back to the first to recycle along with the new incoming signals. By varying the intensity of the feedback you were able to form the sound into a single image without any delay. I enjoy the interplay between the two extremes. This is the first time I have been able to do this. It took me a while before I could afford to buy two good tape recorders to run this process in my own studio. “

Enough about the Time Lag Accumulator (go check that out more yourselves) and onto the Morphagene again. It looks like there’s CV over every parameter, it’s coming around March and is in manufacturing now. There’s more details from Walker Farrell (who works with Make Noise, you’ll recognise his voice from their own videos) in the second video posted below. Both videos are from Analogue Zone, who were awesome when I saw them in Budapest over summer.

Video demonstrator for modular, synths and music tech gear with a background in music composition & production alongside sound design & engineering.

Beautiful work from @audio.gear.obsession with the

Hello! I just wanted to wish you a Merry Christmas

So who joined the Boolean logic class with my vide

My new video will be online soon. Care to guess wh

LAST CHANCE TO SUPPORT, GRAB A DISCOUNT AND MAKE I

WIN AN ONA VCO!!! To celebrate the release of the

Join @modularmeets THIS SUNDAY at 3pm UK BST for t