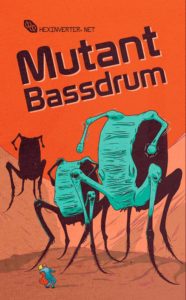 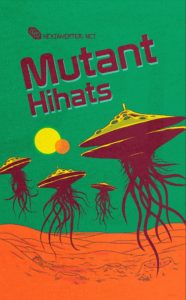 In the March issue of DivKid’s Month Of Modular I spoke to Hannes aka “Papernoise”. If you haven’t heard of him you’ve no doubt seen his work with a range of modular companies for promotional graphics, panel designs and it looks ace! I’m definitely a big fan so was happy to have an opportunity to ask him some questions. Check out his work and website for more. http://www.papernoise.net/

This month (well over the past couple of months really) I’ve had the pleasure of getting to know Hannes Pasqualini aka “Papernoise”. We’ve got a few things “in the works” as it were but for the benefit of everyone reading I thought an interview would be great to get an insight into how he became “the guy” for eurorack panel design. As you’ll see, I’ve spread plenty of pictures across the next few pages so show off his brilliant design work. So Hannes, clearly design work came first but how did you first come to work with modular synthesizer companies. Was it very much a “by chance” stumble into it through friends or were you actively aiming to work within this community?

As you say! It really was a thing that happened by chance, or better as the result of a peculiar chain of events. If you had asked me 5 years ago about getting into modulars I would have said: “no way man!” I’m not going to buy into that money-eating habit!” (laughs). I was more interested in chiptune stuff (C64s and Game Boys), circuit bending, DIY and in building small desktop synths. Through my engagement with the chiptune community I first learned about Olivier Gillet’s Shruti-1 DIY synth (the predecessor of the Shruthi, notice the lack of the “h”). I had to email Olivier a couple of times, convincing him that I had a great idea for an enclosure, until he finally sold me one of the few kits he had made. The
Shruti-1 was one of my first proper DIY projects, after the SammichSID and a couple of Atari Punk Consoles. From there I got more of his synths and started to regularly post and comment on his online forums. As a graphic designer I come from illustration and comics. I had posted some of my works on the Mutable forums and apparently Olivier was aware of them. When he got the idea to make the 4-Pole Mission Shruthi he asked me to work on a movie-poster-like promo postcard. The 4-Pole Mission was a morphing filter and the name was inspired by the movie The Thing (the Carpenter remake). From there we kept working together on several other things: we did the Yellow Magic Shruthi, which featured an illustrated sticker and PCB graphics by me and my wife Elizabeth, various graphics for the Anushri and Ambika synths and redesigned the Mutable Instruments logo, visual identity and website (together with fellow graphic designer Patricia Plangger, who was a co-worker of mine at the time) Then, as we all know, Olivier got interested in modular synths, and developed his first 4 modules (Braids, Peaks, Grids and Edges) and since we were already working together he asked me to take care of the graphics. When he asked me if I was interested in working on something like this, I immediately said: “hell yeah!”, even though I didn’t even have a modular synth at home. Given that I couldn’t possibly design anything for a system I didn’t know much about, I borrowed a couple of modules from friends to learn more about it (Olivier also sent me a bunch of things he wasn’t using at the time), my bandmate Michele sold me his old case (which was basically a Doepfer DIY kit and a couple of wooden planks, held together by tape). That was how I started my journey into modulars. 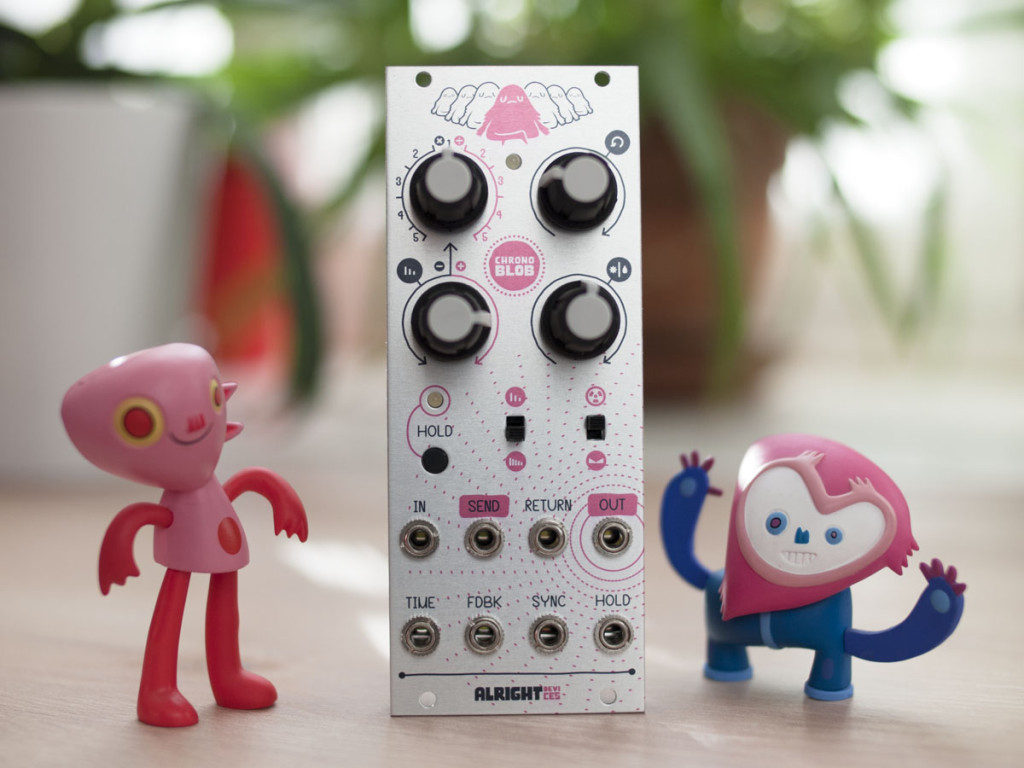 Who was the first company you designed panel graphics for?

Definitely Mutable Instruments, though Hexinverter followed shortly after. A friend told me that Stacy had was looking for somebody to design a logo for Hexinverter and I immediately contacted him. For some time these were my only clients in the modular community. I was lucky to start with them, since they really make amazing modules, which of course helped a lot in spreading my work as well.

Do you get involved beyond the design stages? Working alongside companies with module ideas, helping them get started etc?

It’s really hard not to do that! The thing is: often new clients approach me asking for a combination of panel, logo and visual identity. In these cases it’s often small makers, just starting out. To be able to create a good logo I need to get pretty deep into what people do, why they do it, who they are, what their motivation is, etc. Often these things aren’t fully conceptualized, so I end up helping them to get started in some ways, defining their identity beyond just the logo. Another thing that might happen is that somebody has a new idea for a module and just wants to see how it would work as a panel, or needs feedback on the functionality. In these cases I get involved in the design stage pretty early and sometimes even get to shape the functionality. Lately this happens more frequently, for example, for Black Market’s upcoming Colour Palette Standalone Edition (the pedal), I was part of the core design team from the very beginning. It’s really exciting for me to work like this! 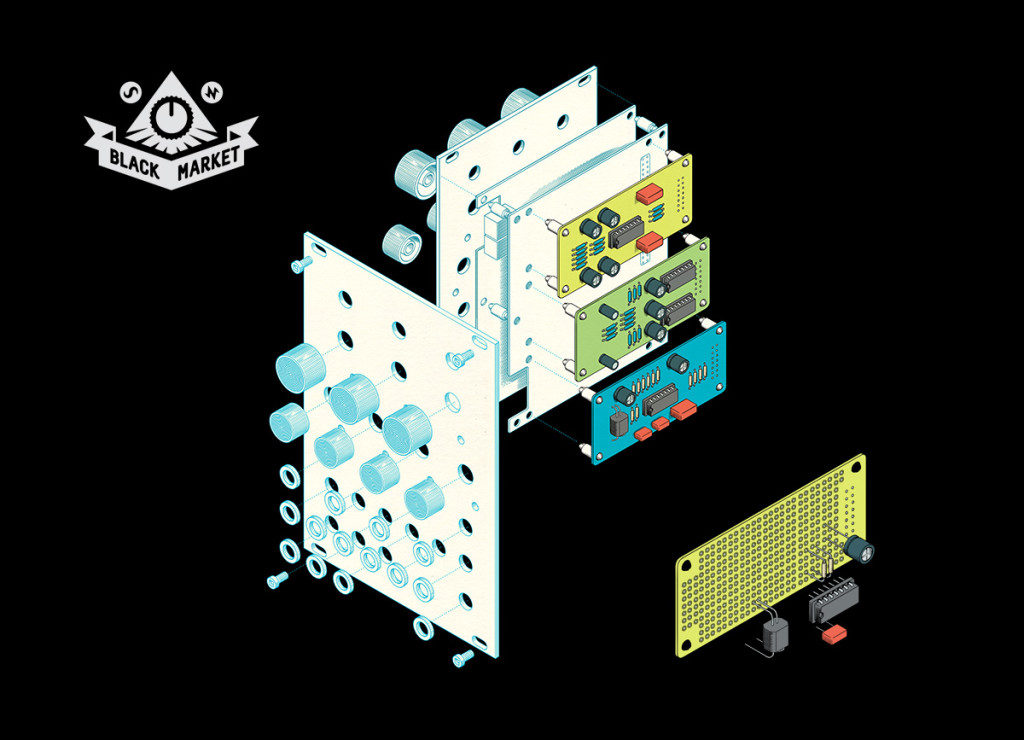 Your designs have something unifying about them, I can tell when I see something from Papernoise, but I can’t put my finger on what that is. Each module company has distinct and varied themes running through them. What’s your approach to creating something unifying both for the company and regarding your ‘style’ … if you’d say you had a style.

Good question. I believe designers shouldn’t try to be artists. Being an artists is all about expressing yourself, being a designer is all about turning form into function and function into form. So what I try to do with each new client is to create a visual style that matches that their identity, help modular users in using and understanding a module’s functionality and in general doing my part in creating great, playable and enjoyable instruments. But of course there’s two factors that still contribute to a style of some sort: first of all, no matter how hard you try, there will always be your personality in anything you make… you just can’t help it, and I admit that I’m not really trying that hard to suppress that either (laughs). The other thing is that people contact me because they have seen my work and like it. That’s great since I want people to work with me precisely because we feel the same about the style and the approach to visual design, not because they need a random guy to “do the graphics”. I should mention that I often work together with my wife who is also part of Papernoise. Some of the designs we made in the last years, like the Alright Chronoblob or the Sonic Potions modules, are really a combination of our respective approaches. She has a more handmade, cute and cartoonesque style (she also works as an illustrator for school and children books), which is often a great counterpart to my own style. Then it also depends if we’re talking about graphic design, or illustration. As an illustrator I pursue two distinct but very defined styles. One with my “real name” and one as Poka Bjorn. The first style is what you can see in the Hexinverter promo stuff, it’s inspired by retro sci-fi and horror illustration and in general is a bit more realistic and detailed. Stuff that would go well with a John Carpenter soundtrack. My Poka Bjorn stuff is more colourful, whimsical and cartoony, I like to think of it as going well with uplifting chiptune tracks, or Solvent. You can spot one or the other approach in my graphic design work as well, even where you wouldn’t expect it. If you look really close, the Indian decorations I make for Olivier’s modules share the same linework style as my Poka Bjorn illustrations, though admittedly the end result is very different.

Do you like to be left to ‘run wild’ with ideas or revamping existing branding and working alongside the companies?

The projects I like most are the ones where somebody just comes to me with a vague set of features and I can go crazy coming up with ideas! This can happen with redesigns as well as with from-scratch projects. In the end I always work alongside with the companies, since as I said, it’s all about turning their identity into visual material or their ideas into a usable interface. But of course some are more strict and others leave more space for me to “run wild”. 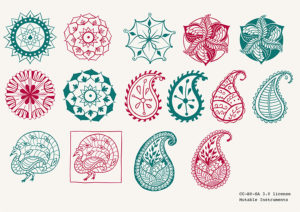 Finally, can you tell us about anything you’re working on to be released this year? Obliviously not sharing private company secrets but is it safe to assume most of the people you work with have new designs in the works?

Right now I don’t have many secrets to keep. Some of what I’m working on has already been announced at NAMM: The previously mentioned Black Market Standalone Edition Colour Palette is one big project I’m fully immersed in right now and another one is the faceplate for WMD’s Performance Mixer Other things will be presented soon at Superbooth, among these check out the new panels I’ve made for Sonic Potions and Frap Tools. There’s some older project, which are still going on. The Soviet-space-race-inspired modules from Tsyklon should land sometime this year (some of these can already be pre-ordered from their website: http://tsyklon.com/) and Rabid Elephant, another new face on the market, also should have their first module coming. Of course both Mutable Instruments and Hexinverter are currently very busy coming up with new designs and ideas, which keeps me pretty busy as well. On the non-modular front, I have been working with Japanese developer Ju-X on a new freezer plugin called Frosting (which should hit the web soon) and am tweaking graphics for Fxpansion’s upcoming sampling drum machine app/plugin Geist 2, which is currently in Beta stage. With Ju-X we also have a bigger project in the works, a multi-track looper called The Cake, once we get Frosting out, that will get some updates as well.

A huge thanks to Hannes for his time letting us get to know him and his work. Be sure to head to http://www.papernoise.net/ to check out his work as well the Horizontal Pitch site here – http://www.horizontalpitch.com/