This interview is from the February issue of DivKid’s Month Of Modular. Check out that issue HERE.

Hi Jim, first of all let’s pretend we’ve never met. Who are you and what do you do?

I was born in Canada, but the majority of my school and youth was in
Oxfordshire, U.K. that is where I became interested in synthesizers when our music class visited EMS on a field trip and they gave us a loaner synthi.

After coming back to Canada I worked with a few more local bands, and have had many different jobs from bicycle mechanic to 3d rendering admin.

The first product I’m aware of from you is the Duofonik Dual SSM2044 Filter. Was that the first module you designed?

I had built other musical electronics, but not in modular format. it was mostly one off audio things. I also had a few DSP synthesizers that were mildly popular in the small sonic core scope community.

So how did the Orgone Accumulator come to life? It seems to blend multiple ideas over wavetables, crossfading, digital FM and AM, unison oscillator swarms etc.

I had made an arduino synth called “scarab” but it was a bit too complicated to make a DIY project for others to build, and I stopped working on it and went on to something else. then the teensy 3 was released. it is an ARM based 32 bit processor, miles ahead of the 8 bit arduino i had been working with, but i could still program it in the same environment, and even use much of my old code.

I prototyped the new version, and kept pushing it to do more. I added some ideas from my old scope synths as well I was quite happy with it at this stage and that was when thought it would make a nice DIY and started designing the panel. I went through a lot of iterations showing each design on the muffwiggler forums some of them were pretty wild! In the end knob spacing for fingers and practicality won out and (greyscale real name) helped me a lot with the 1.x DIY panel design.

1.0 boards and panels were produced and sold much better than I expected compared to the duofonik. I kept working on it after the release, adding more effects modes and tweaking controls. 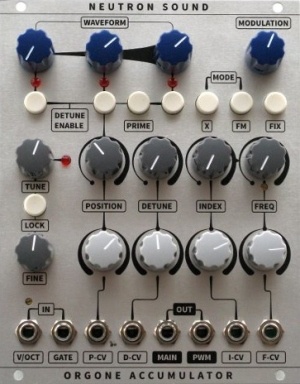 To cut any potential confusion can you outline the differences between the first and second versions.

DIY compatible changes in 2.0 firmware from the version in your original video.
the hardware is the same, but newer panels have some different labels. 8 effects instead of just detuning – interpolation – 16 bit output – in drum effect pulsar and x mode buttons swap CVs so you can modulate decay – pulsar mode (replaces tune lock).

Retail hardware upgrades:
– 4 layer circuit board has large ground planes which lowers noise floor.
– LED indicators and momentary buttons, rather than cycling through the effects they can be selected directly.
– wave selectors can be modulated with a control voltage.
– in drum effect, pulsar and cx buttons extend drum decay tail.
– manufactured by WMD.
– different layout, tapered knobs.
– needs extra programmer to program (WMD)

Finally can you tell us a bit more about what’s to come in 2016 for Neutron Sound?

i will not make a “line of modules” so everyone can have the same thing but with “neutron sound” on the panel. there are plenty of most modules you might need. Sorry “collectors”!

The orgone drum effect is quite popular. I am working on a module with 3 or 4 instances of the orgone drum, with a few additional goodies. An analog phaser with cv able feedback. Also a hardware version of the “rotor” that is in the sonic core sdk and John Bowen
Solaris. I still have not decided if i should make a discreet ladder version of the duofonik, most of the work is done, but there are similar filters already.

Tomorrow you can join us (me and the creator) for