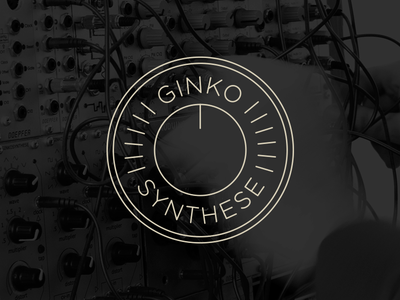 This month I’m interviewing Jan from Ginko Synthese. He makes the awesome Sample Slicer, TTLFO, Grains and more. With a line of a DIY cases and new DIY modules there’s loads going. So I thought we should have a chat!

Hi Jan, I don’t think we’ve ever spoken about anything other than your own modules. Let’s start with some background, what got you into music?

Oh that is a long time ago… I learned flute when I was a young kid. But I really have difficulties in focusing on things I am said to do so teaching me something is quite difficult ;). I had a private teacher and as I hardly practiced at home she thought it might help if I write my own homework, so I got an empty notebook to write down my own ideas about music in musical notation. This helped me a lot and I really liked it! When I went to the middle school we got an early old grey big computer and there was a program on it where you could cut phrases in pieces and rearrange and pitch them, and all monophonic. And as there was only one sound sample “You’ve got mail” on that computer (I really did not know how to make a new one) So my parents went crazy and asked my brother to put some software on the PC for making music. This led me to tracker programs like ST3 and Fast Tracker. But the first experiences of cutting and rearranging one single phrase led me in the end to one of my current products.

How did these experiences lead you into technology and more specifically
eurorack?

My addiction of making music on tracker programs led me into hardware in the beginning. Tracker programs make lots of use of samples and they had weird names like 303, juno, ms20 etc. I really had no idea where those weird names came from so I started to investigate and reallized soon that these names came from real instruments. So I wanted a hardware synth from that point!.. but I was young and did not had any money and could only affort an Electribe EA1, a Roland U220 and an Atari 1040STF to sequence them. I felt like I was the king of hardware :D. But my taste of music was developed by listening more and more to experimental music and especially the U220 made me disappointed in my idea of hardware. I wanted more glitchy weird sounds instead of those bread and butter sounds and I started to experiment with circuit bending and dreamed of a big modular system. And from circuit bending the step to my big dream was a logic step forward, first I simply put those circuit bend stuff behind panels but I became more and more skilled in electronics.

How long were you into eurorack before making your first module the TTLFO?

I have been into eurorack for a few years before making the TTLFO. I
had a little Doepfer rack, a PAIA and some DIY modules and wanted
to make something like the TTLFO just to put in my rack. I thought it
would be a good Idea to make a few to cover the costs. I asked on
the web if there where people who where interested in one and to my
surprise there where more people interested than the amount of
modules I ever could make!

The TTLFO was DIY and assembled, then just available as assembled.
But now you have a new range of DIY modules to compliment your
assembled ones. Is DIY a specific goal for you to support with the
modular community?

Behind all my products there is an idealistic idea of making them affordable for everyone. I started ginkosynthese to make modules I wanted to have myself but did not had any mony so selling them was just a way to cover the costs but since I did not had any money of my own I had (and still have) the feeling that you should make products for a fair price and DIY is a way to keep them more affordable. But after a while I realized that the first PCB’s I designed for the TTLFO where to difficult for many people as there where a lot of standing resistors and they where not layed out very well. I learned a lot and my new designs are easier to solder and that makes me comfortable to make DIY kits again.

Was it the DIY ethics that led you to making your own line of cases?

Yes! Those ethics are really important for me as I have had struggled about money for many years and want to keep things affordable for others. And as I had the opportunity to use a laser cutter daily in my workshop it was a logic step to make those DIY cases. Last winter I moved my workshop to an amazing new space but without the laser cutters so I have to find a way to get those cases back in stock and as money is still a little issue I have to find a right moment to invest in all the parts I need to get them back in stock.

Again you offer pre-assembled and DIY cases, is seeing the end user with a complete Ginko Synthese system something you’d like to see?

I don’t know if that is what I want as the fun part of modulars is that you can combine modules from other builders as well to create your own personal ideal synth. But I am working towards a little complete line I call the GRAINS line for now as the GRAINS is the first module I designed in that range. It will be a super affordable compact series of only 4HP modules and all only available as DIY.

Your Sample Slicer is a unique module in how it presents live sample recording and mangling. What led to that module? Were you chopping lot of samples on other devices prior to you creating the Sample Slicer?

The sampleslicer is for me the module that resembles my first experiences in making electronic music. It has everything to do with the phrase “You’ve got mail” I talked about above.

What’s next for Ginko Synthese? Anything specific you’d like to tell us?

Since I moved my workshop to a new extremely creative space I have worked hard to build up my studio and have our own bar and a stage. I am going to use this to get other people involved in making music and give them a change to play on a proper PA system for small audience. After the summer there will be several studio sessions where artist can use my studio for free. Results will be released on tapes. All these things give me a lot of energy to develop new products. But there are already some products almost finished to release; some new products in the GRAINS line (a filter, a small sequencer and a feedback distortion) and a sequencer as add-on on the TTLFO.

Finally, anything you’d like to add before we finish?

I love your video’s!!!! They inspire me lot of times.